How honoured we were, to have Mr. Bill Ptacek, CEO of the Calgary Public Library, join our Club’s special events over the last few years. As if he didn’t have anything else to do! (Search “Bill Ptacek” for more on this site.)

As reported by Christina Frangou, he “dedicated his career to public libraries in both U.S. and Canadian cities, modernizing, expanding and reshaping them into places where people can gather.” He made an enormous difference to our entire City, and in June was named Calgary’s Citizen of the Year.

We join so many other Calgarians in mourning his passing.

“Life isn’t worth living if you don’t have a good book going as far as I’m concerned.” (Bill Ptacek)

On September 27th a special plaque was unveiled, commemorating the Memorial Park Library becoming a national historic site.  It details the vision and hard effort by Annie Davidson and the women of the Calgary Women’s Literary Club to build a library. Doloris and Margaret were delighted to be part of such a heartfelt ceremony, which was attended by CPL’s own Bill Ptacek, and representatives of City Parks and Parks Canada, among others.

CBC’s Rachel Ward was in touch with Mary Carwardine.

… and click here for more on the Memorial Park Library. 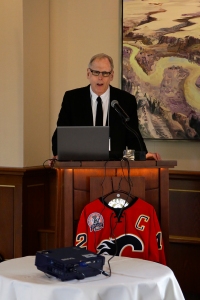 At our 2015 Annual General Meeting April 28, we had the tremendous opportunity to hear Mr. Bill Ptacek discuss a very exciting phase for the Calgary Public Library.

And he had the opportunity of meeting most of us! 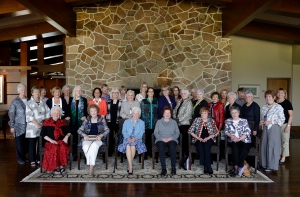 The 2015 AGM of the Calgary Women’s Literary Club