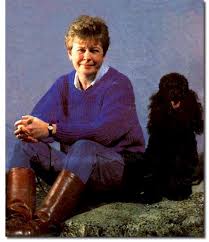 Author L.R. Wright (“Bunny” to family, friends and colleagues) resided in Calgary only from 1970 to 1977.  However, she honed her writing skills here, as journalist and under the mentorship of W.O. Mitchell – and she developed into an acclaimed writer, nationally and internationally. A Chatelaine article labelled her “Canada’s Queen of Crime Fiction.” Her crime series has often been compared to P.D. James and Ruth Rendell, no less! Her books delve deeply into character and human behavior. She was quoted as saying that she wanted to write fiction “…because you can tell more truths in fiction”.

Born to write, by age 14 Bunny realized that a novelist couldn’t necessarily earn a living and decided instead on a career in journalism. She took secretarial courses to learn to type and enrolled in night classes in creative and non-fiction writing. At 19, she sold her first article to the Globe and Mail about what it was like to be a teenager in Germany.

In 1959, she found a job at the small-town British Columbia weekly, the Fraser Valley Record. Although she loved newspaper work, she decided California was the place to live, found a job in an advertising agency and became involved in amateur theatre productions. In 1961 Bunny returned to Vancouver to attend the UBC Summer School of Theatre, where she met John Wright. They both performed with Canada’s first touring theatre company for young audiences, before marrying in 1962.

As in her growing-up years, her family was nomadic, following job opportunities from city to city throughout western Canada and California. Bunny worked at odd jobs, putting her husband through graduate studies in drama at Stanford and raising two daughters. She didn’t return to journalism for almost ten years, until 1968, when the family moved to Saskatoon and she worked as a reporter for the Star-Phoenix.

A year later the Wrights moved to Calgary where Bunny worked as a reporter for the Albertan and the Herald, and later as Assistant City Editor at the Herald. Johnna Wright wrote the following:

“It’s my impression that our time in Calgary had a great impact on Mom’s development as a writer. The Calgary Herald supported her to study fiction writing under W.O. Mitchell at the Banff School of Fine Arts, and it was after that that she completed her first novel.  She always said that being a journalist had a huge impact on her fiction writing…  It made her an extremely conscientious researcher and fact-checker, and also taught her to meet deadlines.”

L.R. Wright shared her writing techniques in an article “The Truths of Fiction” (Books in Canada, April 1992). “W.O. Mitchell has a way of teaching that he calls ‘freefall’. It’s stream of consciousness: you sit at the typewriter and just kind of write. And I found that very freeing.” Even so, she was still stuck until she phoned her husband and he advised her to pretend she was someone else, just as when she was an actress. Another W.O. Mitchell technique is called “sense memory” where one tries to recall an incident, second by second, drawing on all five senses to evoke it. Bunny said, “That is what I learned in Banff, and I have been using it ever since.”

The family then moved to Edmonton, and Bunny was able to leave journalism and write. She won the Alberta Culture Search-for-a-New Novelist competition, which allowed her to work with an editor at MacMillan to complete and publish her manuscript. Neighbours is about a mentally disturbed woman and the people around her. Much like Alfred Hitchcock stories, what is disturbing or terrifying is that the settings and people seem “everyday”. As Western Canadian readers, especially, we know these characters and settings and people very well – or do we?

Soon after, the family moved to a suburb of Vancouver, where the family stayed. Wright’s next two novels, The Favorite and Among Friends, were published by Doubleday in 1982 and 1984. These provided income but they were not well received by literary critics.

It was with her fourth novel, The Suspect, that Bunny achieved national and international attention as a crime novelist, winning the 1986 Mystery Writers of America Edgar Allan Poe Award for best novel. It was translated into 8 languages and optioned for movie rights. The book was the catalyst for the Karl Arlberg and subsequent Edwina Henderson series. She continued to write mainstream novels but they never did as well as the mystery novels.

After publishing The Suspect, L.R. Wright completed an MA degree, taught writing extensively, travelled across Canada and the U.S. promoting her books and attending conferences, served as Chair of the Crime Writers of Canada. She was a juror for numerous literary awards and granting bodies. L.R. Wright’s novels have been published in Canada, the USA, Great Britain, Denmark, France, Germany, Italy, Japan, Norway, Spain and Sweden. She wrote adaptations of several of her books for CBC Radio drama and for film and television, often in collaboration with John Wright. Her daughter Johnna Wright is currently working on a stage adaptation of The Suspect.